As announced at the previous Directions, the latest version of Microsoft’s ERP system Dynamics NAV 2018 has been released on the 1st of December. The new version contains several new features and improvements. 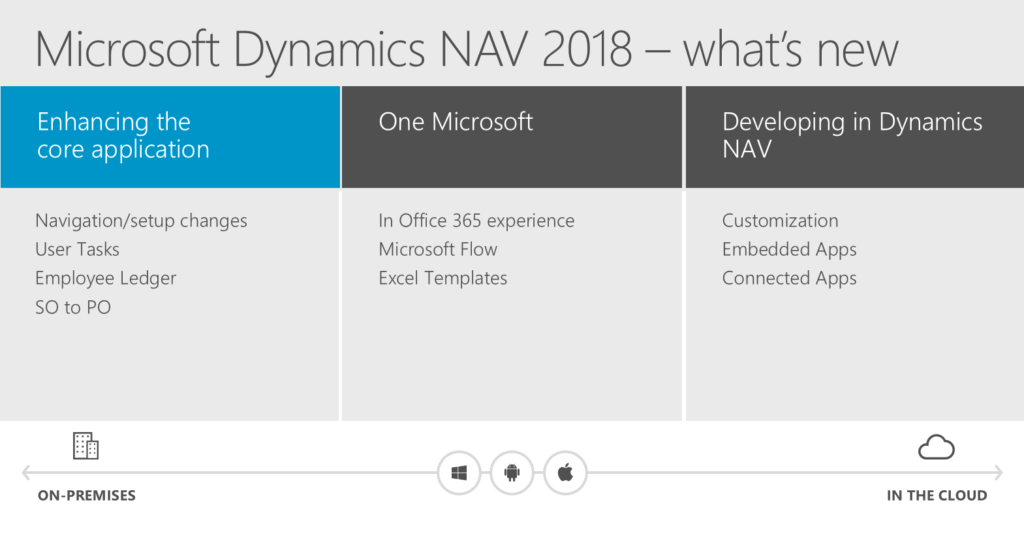 Aside from improved Office 365 integration and several new general features, the changes mainly concern financial accounting and inventory management. The most important enhancements and improvements at a glance:

General new features
With the new version, the user is fully supported during setup and configuration by various setup wizards accompanying the user step by step in defining the parameters for a certain module or area. In addition, all classic setup pages can now be called at one single place, categorized by area. Another new feature is the ability to change the role center directly in the Web Client without logging off and to create user task lists that – similar to Outlook – can pint to certain ERP-specific tasks, support prioritization and repetition, and can be connected to defined pages or reports. Version 2018 also allows the user to generate a PDF preview of reports in all major browsers (previously only Internet Explorer).

New financial accounting features
In financial accounting, dimension filters can now be applied to all dimensions. These are available, among others, in the chart of accounts, general ledger, accounts payable and receivable. Certain Excel reports, such as balance sheets, profit & loss, cash flow statements or traw balance sheets, can now also be constantly updated via Excel. Moreover, lists (e.g. journals) can now be accessed in Excel and changes written back, taking business logic into account. Both require an Office 365 account. Dynamics NAV 2018 also offers an additional subledger for employees with individual “employee” ledger entries as well as an account type “employee” in the general journal (e.g. for settling travel expenses). In addition, the new Accountant Hub provides cloud-based support for external accountants.

New inventory features
Dynamics NAV 2018 surcharges based on gross weight and volume can now be assigned. Gross weight and volume are taken from the item card and units are converted based on this information. Another new addition is the opportunity to adjust vendors with OCR for an even more accurate recognition of invoices. Moreover, items can now be classified (category and further attributes) based on images (using a cloud-based Azure Machine Learning Algorithm).

Aside from the new features mentioned, it should also be noted that internal workflows in Dynamics NAV 2018 can be connected to Microsoft Flow. One use for this would be the approval process for quotes and orders. The approval can be done directly in Outlook, whereby the Dynamics NAV integration also allows the document to be displayed directly in Outlook (assuming Office 365).

Fields and their position can now be adjusted (i.e. fade in and out) in the Web Client. The respective adjustments are made across role centers and users and are stored as extensions. Visual Studio Code can also be used as an additional development environment for Dynamics NAV 2018.

Microsoft has already announced the next release, Dynamics NAV 2018 R2, for spring 2018. Then, the full Cloud/SaaS version (currently known by the working title Dynamics 365 “Tenerife”) will also be released. A final unification of both products and a renaming of the entire product suite is also expected in the coming year.